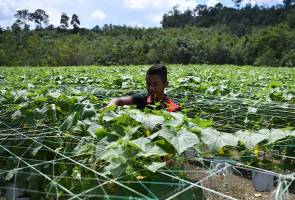 RAUB: Only 22-years-old, but Azmani Nurdin has made the Orang Asli community, especially the Temuan tribe, proud of his success as an agro-entrepreneur.

He is the owner of a vegetable farm, covering more than 0.4 hectare, in RPS Sungai Bilut here, where he started his fertigation project three years ago.

The farm project has been a success, providing him with good income and an opportunity to provide employment for local residents.

Azmani now has six workers to help him in the farm, which he planted with cucumber, chilli, brinjal and petola alternately to maintain the fertility of the soil there.

“I started working the land when I was 19 and went from one agency to another seeking for assistance and also borrowed money from family members and friends for use as startup capital for the farm project.

“Many were skeptical initially, they doubted my intention, capability and seriousness to start the project…perhaps, because they thought I was too young then and had no experience.

“After I completed Form Five, I worked as a rubber tapper and was paid RM70 a week. Then, I went to Penang and took up skills training. So, true indeed, I knew nothing about farming then,” he said when met by Bernama at his farm.

Azmani attributed his success to his parents, Nurdin Ayob, 54, and Rohani Jo, 45, for their support.

“After asking me repeatedly if I was serious to carry out farming and whether I was capable of doing it, my parents then allowed me to carry out my farming project on a piece of land that belonged to my mother.

“The land was then full of undergrowth.  I had to turn a deaf ear when passers-by made fun of me, asking whether the undergrowth were my vegetable plants.

“Even after my first harvest, there were still some who were cynical, they doubted that I could sustain and be a farmer.

“Alhamdulillah, with determination and support from family and friends, I succeed and able to prove that agriculture can provide good income, too,” he said.

Like other farmers, Azmani said there were challenges and trying times, like at the end of 2017 when his chilli crop was attacked by a disease and caused him losses of almost RM40,000.

“I was so down. My concern was not being able to pay my workers’ salaries. Refusing to give up, I called them and explained the real situation. They were very supportive and together we started planting a new crop to regain what we had lost,” he added.

Currently, his farm is planted with cucumber and the crop is now ready for harvesting.

“We expect to harvest about 20 tonnes of cucumber, worth about RM20,000, which will be sent to the Selayang Wholesale Market in Selangor and the Federal Agricultural Marketing Authority (FAMA).

“I am grateful for having ventured into farming because it provides an income that has enabled me and my family to enjoy a more comfortable life. In the past, there were times when we only had cassava to eat, but now, we can have rice every day,” he added.

Early this year, Azmani enrolled himself at the Lipis Agricultural Institute to learn more about agriculture, but his studies were interrupted by the COVID-19 pandemic. During his absence, his father and brother, Shukran, 23, helped out on the farm.

“I hope more Orang Asli take advantage of the opportunity provided by the government to succeed. Only we, ourselves, can change our life and destiny.

“Even if we are given a thousand and one types of aid, they will take us nowhere if we do not work hard,” he said, adding that he planned to take a lease on an adjacent piece of land belonging to his uncle so that he can expand his farm next month.