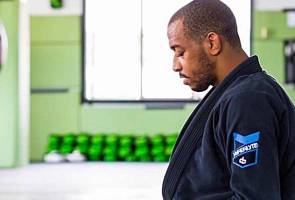 EVERY time Malaysia’s Agilan Thani and Keanu Subba hone their martial arts game at ONE Championship, the pair have forged a reputation as being amongst the organization’s best submission athletes.

With a combined eight submissions between the pair, it is no surprise why their opponents prefer to strike rather than getting entangled in a contest on the mat.

But the two humble athletes have always cited one inspirational figure behind their impressive Brazilian Jiu-Jitsu (BJJ) skills. It is no other than Brazil’s Bruno Barbosa, a third degree BJJ black belt, with a 20-year resume in the field.

As a coach, Barbosa, or commonly referred to as “Bruninho”, has led Monarchy MMA to several accolades in the Malaysian BJJ scene, amongst them being a 12-time Copa da Malasia champion.

Barbosa has also inspired his students to test their BJJ skills at various International Brazilian Jiu-Jitsu Federation (IBJJF) competitions throughout Asia, and he has also helped Thani and Subba to overcome several world-class athletes at ONE.

While as a competitor, Barbosa’s medal haul is a testament to his success in the sport, his latest and greatest achievement is being a gold medalist at the 2018 Tokyo Open IBJJF competition and a runner up at the 2018 IBJJF Masters International Asia.

“It’s really about giving back to the society or my students,” the ever-humble Kuala Lumpur-based coach stressed.

“Agilan and Keanu, just like Ev Ting and the rest of my students are more than just people I teach. I learn a lot from them as well every day.”

Besides being a coach and a role model for some of ONE Championship’s finest stars, and a host of Malaysia’s up and coming stars, Barbosa singled out another moment which has stood out in his coaching career thus far.

“Malaysia has never had an IBJJF trophy, and in Manila two years ago, we achieved that. We won the third place overall trophy, and it is my greatest achievement as a coach,” the 36-year-old Petropolis native shared.

“I think almost every athlete returned back with a medal. We won 12 gold, six silver, and four bronze medals.”

When Barbosa arrived in Malaysia six years ago, little could he imagine how he would go on to spread the knowledge of BJJ in the country.

Besides his achievements in Malaysia, Barbosa has also left a positive impact in Brazil and even Kyrgyzstan through the sport.

A much-loved character on the mats and in the gym, the Brazilian admitted although he would not know when his ‘time’ in Malaysia will come to an end, he will forever be glad on the positive impact he has left in Malaysia through BJJ.