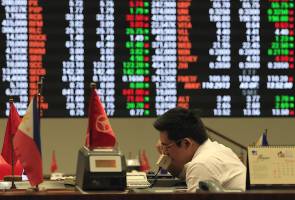 MANILA/SINGAPORE: The Philippine Stock Exchange closed indefinitely on Tuesday while currency and bond trading were suspended, the first market shutdowns worldwide in response to the coronavirus, with authorities citing risks to the safety of traders.

The shutdown comes after some bourses around the world closed trading floors or paused trade after withering falls in market value, but it is the first blanket market halt.

And while it was done for health reasons, amid a broad lockdown in the Philippines, it raises the prospect other exchanges may follow and has drawn analysts’ attention.

“Given the unprecedented speed of the slump in equity prices, it has been suggested that stock exchanges might be closed soon if things don’t turn around,” research house Capital Economics said in a note on Tuesday.

AdMacro research head Patrick Perret-Green had also raised the possibility in a note issued over the weekend, before the Philippines move.

“We have seen it before. I believe we could see it again,” he said. “Governments do not need or want the added stress and distraction at this time.”

The Philippine Stock Exchange said trade was suspended until further notice “to ensure the safety of employees and traders,” amid a broader national lockdown.

National Treasurer Rosalia de Leon cited the lockdown as the reason for the suspension of fixed income trade. Currency trading is to resume on March 18.

In Malaysia, where a similar lockdown comes into force on March 18, the securities regulator said all capital markets will operate as usual.

Kuwait’s exchange has suspended trade at least twice this month, after daily falls of more than 10%, while in Indonesia, Jakarta’s bourse has introduced new circuit breakers which halt trading for half an hour if the main index falls 5%.

That comes amid a swathe of short-selling restrictions in markets from South Korea to Italy and Spain.

Capital Economics, however, said closures are ineffective at salving investor sentiment. The consultancy expects – as in the Philippines – health reasons to be invoked should other bourses shut.

“On the rare occasions when stock markets have been shut in the U.S. in the past, it has usually only been for practical reasons, such as after 9/11, rather than as means of trying to restore confidence…(It) might not work in any case.

“Investors might end up selling anything else they could if they needed to raise cash in a hurry.”

Global markets are in meltdown as the pandemic spreads, with roughly $14 trillion in shareholder value erased and even safe assets such as gold have been sold to cover losses.

The Philippines benchmark index fell 8% on Monday and is down 20% for March so far, already its worst since October 2008.

Malaysias GDP to grow 9 per cent in 2021, fastest among ASEAN-5 countries – IMF