The Sage, the Stuntman and the Star

“YOU’LL be safe with me!” immediately caught my attention.

I looked across the huge amphitheater that looked more like a movie set, I was distracted from the conversation with my friend.

His deep voice boomed cross ways and filled the space between us: “There are many bad people around. Stay with me and I will protect you.”

And just like that I was focused on ‘The Sage’, the opening character for the Waterworld performance at Universal Studios.

The Sage is the leader of a community of the good guys called the ‘Atollers’.

He is likeable and in charge as an affable authority figure, responsible to keep the atoll running and prepare for any attacks from the Smokers, the bad guys.

As a character, the Sage is very interesting as he is the first point of contact that the audiences have as the opening to the show.

You will see the Sage and his merry band of individuals that drives the first half of the show, interacting with the audience, which are really refugees settling into their new homes as the existing crew.

You don’t realize this as you find yourself immersed into the story of Waterworld before the explosions take over.

Even if you haven’t watched the movie by the same name, produced in 1995 starring Kevin Costner, you would still be able to understand what’s going on.

A fight ensues as the Smokers attack the atoll and the Sage and his people, go head to head, pitting muscle against brawn.

There is a moment of panic when the Sage is overpowered, hung upside down and dropped into a toxic tank.

We hear him fall and then, all is silent, and the audience are whispering in hushed tones: “What happened to him?”

The blasts take over but not at the expanse of the storytelling. 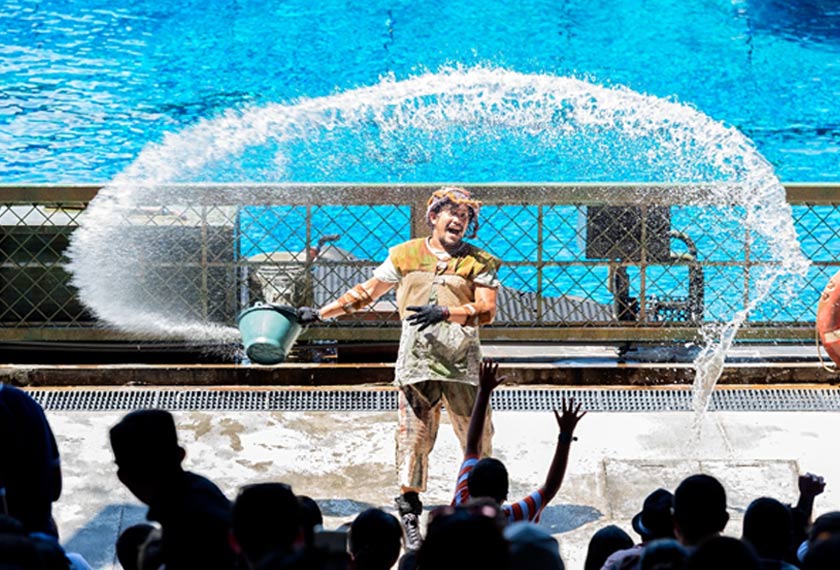 The ending is spectacular with a plane crashing into the set with more detonations as an encore!

There are thunders of applause, and we see the actors/stuntmen (including the Sage) assemble for picture opportunities with the audience.

But the question that was besiege my intrigued mind was: “Who is that Sage?”

This young man that was so interesting to watch, is none other than Alvin Richard.

Born and bred in Singapore, Alvin has an extensive background in judo, capoeira and cheerleading!

He took up Judo as an extra-curricular activity while in school and has stayed active for the past 12 years.

Capoeira and Cheerleading, he picked up while studying Psychology at Singapore Management University.

Little did he know that all those skills would come in handy for his present job at Waterworld!

Flashback to a few years ago, Alvin’s humble beginnings was working as a sales person for Microsoft when they were launching their first generation of Kinect for Xbox.

He was basically the man on the ground that tested the system and showed the audience the mechanics of how the product worked.

It was during working with these pool of freelancers and talents that he started to take on roles as an extra.

“You know the ones when the audience only gets to see your back” he quips.

Then he began to take on bigger roles. His big break arrived when he landed a HBO production called ‘Sarangoon Road’ in 2013, where he played a drug dealer, Lionel Cheong.

The script called for him to fight with one of the main characters in the episode and flung through a door.

“They had a stunt double for me because they didn’t know that I had all the background in judo and stuff.

“I started talking to my stunt double and it just so happens that he was under this company called Action Horizons that also runs the Waterworld workshops, for actors and stunt practitioners. He invited me to one of these workshops and as they say, the rest is history.”

Alvin attended a few of these workshops where amateurs as well as stunt practitioners get together and practice their skills.

“After a few sessions, eventually they said that I had the right skill set and personality to join Waterworld. They asked me to come in and give it a try.

“I joined as a trainee but started with Halloween events for Universal Studios – like flying zombies and someone that is set on fire, but it was good fun.”

Training for Waterworld took a couple of months that covered familiarization of the set, basic swimming competence, general awareness about climbing ladders and ropes and the role of the Sage.

And there was the specific stunt, falling into the toxic tank that needed special training and attention. So are there any other prerequisites?

So what does go through his mind when he is suspended upside down in mid-air before dropped in the toxic tank?

“Honestly, nothing much, just concentrating on keeping in character mostly.”

The issue that begged the question was, has he ever been injured?

“Well, the reality of it is that the nature of what we do has an inherit danger, we get bumps and scratches, like this bruise I have on my knuckles, but nothing serious.”

Of course he wasn’t about to give me secrets of the trade but did say that they have a very comprehensive training program.

“By the time you see a performer do a stunt, he would have probably done the stunt several times and he is very comfortable with it, he knows how to handle it. We have very good safety records.

“All equipment are checked multiple times by several personnel to ensure safety on the set.”

The only time that this sensitive Libran has ever gotten hurt was when “people hurt my feelings by not being into the show” he says with a cheerful chuckle.

According to Alvin, Waterworld has a relatively small group of few performers so everybody has an important role to play and a vital contribution to the tale.

The story is not structured like a movie where there are supporting actors. Everyone brings their own flavor and nuances to the character, which makes it more exciting and real.

There is a mix of stuntmen from Australia, the United States, Britain and a pool of local young men that make up the entire cast of 23 performers.

We have water skiers, rope people and stuntmen with different skill sets that come together to create something amazing. We share skills together and the knowledge exchange is simply incredible. It’s a great environment to work with highly motivated, skilled and nice people.”

When asked what’s it like to wake up and go to work every day at Universal Studios, Alvin said this with a big grin: “Universal Studios is a happy place, people go there to have fun.

“We have fun entertaining the audience as much as they enjoy our performances. There are fond memories and good friends. At Waterworld specifically, we bring each other up, there are almost no office politics.

What is important is to bring a good show to the crowd and they return that energy, it’s a great cycle.”

Having joined Waterworld since 2013, Alvin is just enjoying the ride while it lasts, “I love the show, I love performing and I’ll keep doing it for as long as I can… we even do the show in the rain but not thunderstorms, for safety reasons, of course.

“I don’t mind doing it in the drizzle or slight rain because it gives more drama to the action when the explosions happen. It’s a bit darker and you can see all the flames, it’s quite cool, really.”

Standing at 175 meters, his normal regime includes his personal workout and a few days at the gym.

On days that he performs, the team does warm ups together to get ready for the days performance.

Adequate rest, food and water in order not to be dehydrated in the outdoors despite being in the water most of the time, is a must.
Basically your body needs to be ready to do what you need to do.

He was cast as an army Sargent in the movie directed by Jack Neo, one of Singapore’s prolific filmmakers to date.

His proudest accomplishment thus far was when the production of Hitman: Agent 47 came to Singapore in 2015.

He was one of the five stunt performers in the movie. He had a chance to meet and work with renowned stunt coordinator, Jonathan Eusebio and fight coordinator, Jon Valera, who also worked on movies like Iron Man 2, The Avengers and Doctor Strange.

“It was so much fun to see how performers from other countries work and I got to meet the stunt double for the leads. We were playing the part of the henchmen, escorting the villains around but as the stuntmen that play the bad guys, you die a lot” he answers with a deep laugh.

Asked if being a villain would be a preferred role to play in future movies, he had this to say: “I wouldn’t mind villain roles actually because they are enjoyable to play but a hero.

“It depends of what defines a hero. In the world we live in, there are more issues, shades of grey that we need to factor in and that I feel, also captures the reality of how life is and so the hero’s and the villains are not so clear cut.”

He also expressed interest to be involved in movies across the causeway, if given an opportunity to display his skills.

And what are the future plans for this remarkable stuntman?

“Action Horizon is a great company that has ties all the way to Hollywood and I hope to be part of something there, someday.”

But what is more important for me is, I would like to build up a stunt community here, in Singapore.

Right now I feel that scriptwriters and filmmakers don’t really write action as much because they feel like there are not many people capable of doing those stunts.

But the reality is, that’s not true, there are a lot of talented stunts performers that can bring it to an international level.”

Whatever the future holds for this talented young man, I wish him all the success and hope that he will be a familiar face on the big and small screen in Singapore and across borders.

And if you ever find yourself at Universal Studios, go and say hi to the friendly Sage and see if you’ll be as distracted, as I was. 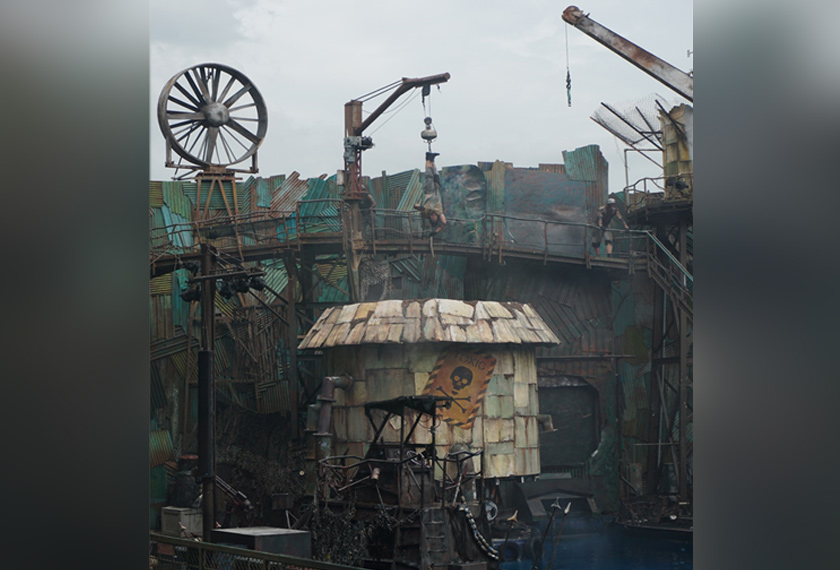 ** The views and opinions expressed in this article are those of the author(s) and do not necessarily reflect the position of Astro AWANI.