BANGKOK: Shares plunged in Asia on Friday, with Japan’s benchmark sinking as much as 10% after Wall Street suffered its biggest drop since the Black Monday crash of 1987.

Markets worldwide have retreated as fears of economic fallout from the coronavirus crisis deepen and the meltdown in the U.S., the world’s biggest economy, batters confidence around the globe.

Losses in mainland China, where communities are recovering from the worst of the virus, were more modest, with the Shanghai Composite index down 3%.

Overnight, the sell-off on Wall Street helped to wipe out most of Wall Street’s big gains since President Donald Trump took office.

European markets fell 12% in one of their worst days ever, even after the European Central Bank pledged to buy more bonds and offer more help for the economy.

“Between the lack of a strong U.S. fiscal response and the latest travel ban for arrivals from Europe to the U.S., global markets appear to have been tipped over into a sell-everything mode,” Jingyi Pan of IG said in a commentary.

Overriding concerns about the actual impact on business and trade is pessimism over how the crisis is being handled, with the “sum of all fears are culminating with the view that policymakers remain well behind the curve,” said Stephen Innes of AxiCorp.

Not all markets have suffered equally, but many are down by double-digits from just weeks earlier. Thailand’s SET has lost nearly 40% and the Philippines’ benchmark is down more than 30%.

The rout has come amid cascading cancellations and shutdowns across the globe — including Trump’s suspension of most travel to the U.S. from Europe — and rising worries that the White House and other authorities around the world can’t or won’t counter the economic damage from the outbreak any time soon.

“We’re starting to get a sense of how dire the impact on the economy is going to be. Each day the news doesn’t get better, it gets worse. It’s now hit Main Street to a more significant degree,” said Liz Ann Sonders, chief investment strategist at Charles Schwab.

Stocks fell so fast on Wall Street at the opening bell that they triggered an automatic, 15-minute trading halt for the second time this week. The so-called circuit breakers were first adopted after the 1987 crash, and until this week hadn’t been tripped since 1997.

The Dow briefly turned upward and halved its losses at one point in the afternoon after the Federal Reserve announced it would step in to ease “highly unusual disruptions” in the Treasury market and pump in at least $1.5 trillion to help calm the market and facilitate trading.

But the burst of momentum quickly faded.

The coronavirus has infected around 128,000 people worldwide and killed over 4,700. The death toll in the U.S. climbed to 39, with over 1,300 infections. For most people, the virus causes only mild or moderate symptoms, such as fever and cough. For some, especially older adults and people with existing health problems, it can cause more severe illnesses, including pneumonia. The vast majority of people recover from the virus in a matter of weeks.

The combined health crisis and retreat on Wall Street have heightened fears of a recession. 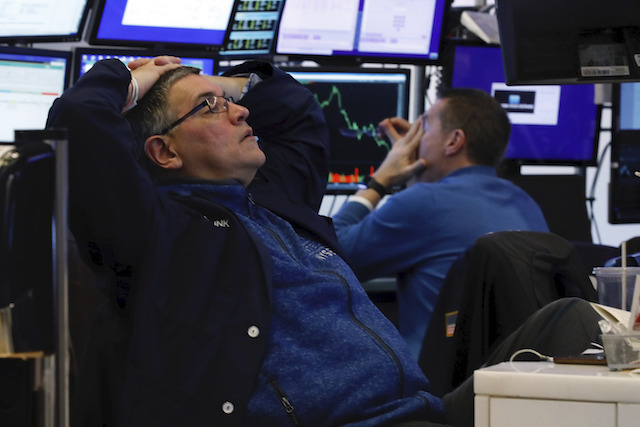 Just last month, the Dow was boasting a nearly 50% increase since Trump took the oath of office on Jan. 20, 2017. By Thursday’s close, the Dow was clinging to a 6.9% gain, though it was still up nearly 16% since just before Trump’s election in November 2016.

The Dow officially went into a bear market on Wednesday, when it finished the day down more than 20% from its all-time high. For the S&P 500, this is the fastest drop since World War II from a record high to a bear market.

“This is bad. The worst and fastest stock market correction in our career,” Chris Rupkey, chief financial economist at MUFG Union, said in a research note overnight. “The economy is doomed to recession if the country stops working and takes the next 30 days off. The stock market knows it.”

After earlier thinking that the virus could remain mostly in China and that any dip in the economy would be followed by a quick rebound, investors are seeing the damage and disruptions mount.

The fallout mounted Thursday, as the NCAA canceled its men’s and women’s basketball tournaments, major league baseball postponed opening day, and Disneyland announced it is shutting down for the rest of the month. Even the Chinese side of Mount Everest closed. Closer to Wall Street, New York’s Metropolitan Museum of Art, Carnegie Hall and the Metropolitan Opera shut their doors, and Broadway theaters planned to go dark.

“Anyone who tells you they know how long this is going to last is wrong,” said Adam Taback, chief investment officer for Wells Fargo Private Bank. “The uncertainty here is trying to figure out how you get this virus under control, and is that a matter of days, weeks or months.”

In other trading, the oil market, which suffered huge shocks last week, is still on the decline.