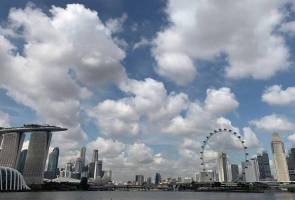 SINGAPORE: Singapore’s Trade and Industry Ministry (MTI) has downgraded the republic’s Gross Domestic Product (GDP) growth forecast for this year to between -7.0 and -4.0 per cent from the previous range of -4.0 to -1.0 per cent.

This was in view of the deterioration in the external demand outlook for Singapore as well as the expected economic impact of the Circuit Breaker measures, the ministry said in a statement.

Notwithstanding the downgrade, MTI noted that there continued to be a significant degree of uncertainty over the length and severity of the COVID-19 outbreak, as well as the trajectory of the economic recovery, in both the global and Singapore economies.

According to the ministry, the republic’s economy shrank by 0.7 per cent on a year-on-year (y-o-y) basis in the first quarter, a reversal from the 1.0 per cent growth in the preceding quarter.

On a quarter-on-quarter seasonally-adjusted annualised basis, the economy shrank by 4.7 per cent, a pullback from the 0.6 per cent expansion in the fourth quarter of last year, it said.

However, three sectors saw some expansion in growth in the quarter, namely manufacturing; information and communications; and finance and insurance.

The manufacturing sector expanded by 6.6 per cent y-o-y, reversing the 2.3 per cent contraction in the previous quarter.

Growth was on account of output expansions in the biomedical manufacturing, precision engineering and transport engineering clusters, which outweighed output declines in the electronics, general manufacturing and chemicals clusters.

The information and communications sector grew by 3.5 per cent y-o-y while the finance and insurance sector gained 8.0 per cent y-o-y.

The construction sector, meanwhile, contracted by 4.0 per cent y-o-y, followed by transportation and storage which reduced 8.1 per cent.

Within the transportation and storage sector, the air transport segment shrank on the back of a steep decline in air passengers handled at Changi Airport due to the global travel restrictions imposed to contain the spread of COVID-19.

MTI said as there remained significant uncertainties in the global economy, the outlook for the Singapore economy had weakened further since March.

Nonetheless, the ministry said there were pockets of resilience in the Singapore economy seen within the manufacturing as well as information and communications sectors.