History and heritage in art

RECENTLY I had the good fortune of meeting artist Ismail Embong who, at last, agreed to give me his time on two consecutive days; on the first day in his office space at the International Institute of Islamic Civilisation & Malay World (ISTAC), and on the second day in his studio in a Yayasan Warisan Negara bus. Both occasions revealed an intriguing picture of the man as an artist and the artist as a man.

Pak Ismail, as he likes to be called, is indeed an artist of great talent in his translation of Malaysian history and heritage into brilliant works of art. In this he follows the classical genre of painting events and narratives in history which, in the European tradition, also includes myths and legends.  His paintings of Malayan-Malaysian history on huge murals are spectacular, combining landscape, portraiture and still life of heritage objects and costumes using deftly executed brush strokes to apply the subtlest of paint hues.

Pak Ismail confesses to being a history and heritage buff, researching every little detail before he ventures into his artistic interpretation. Unlike scholars, academicians and history writers who would have to substantiate their research and writings on any aspect of a country’s history with facts, primary and secondary sources and perhaps even personal anecdotes, a film maker or an artist interpreting scenes from history would have the creative license to add colour, literally and figuratively, to them. 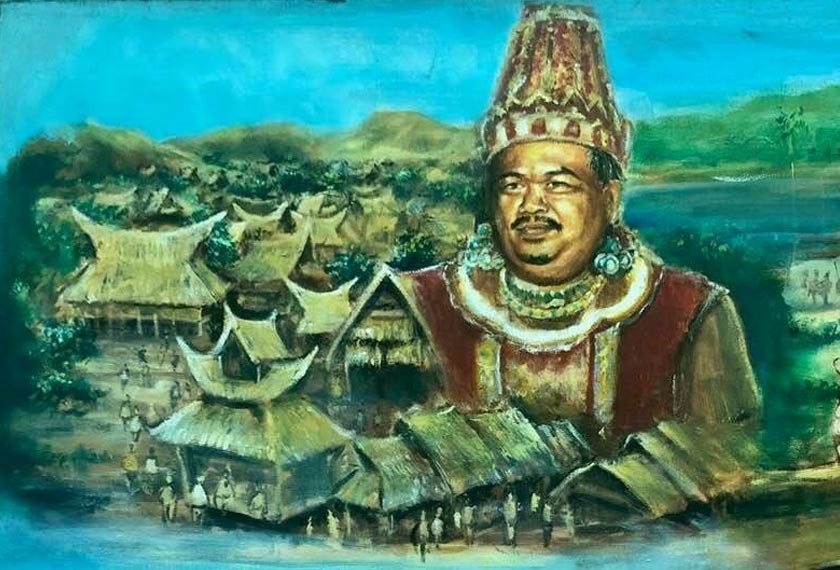 Thus in Pak Ismail’s paintings of old Malaya, clashes between foreign invaders and the local people are depicted in frighteningly realistic scenes. Portrayals of foreign emissaries on elephants bringing tributes to the local chieftains under decorative umbrellas are magnificently rendered.  Illustrations of Portuguese and Dutch ships arriving in Malacca in turbulent tropical waters are beautifully crafted.

One particular painting in the making in his bus studio caught my eye. The picture of the lion-like animal amidst tropical greenery and undergrowth is that of a Mandrillus monkey, Pak Ismail explained. He then went on to argue that there were and are no lions in the tropical wilderness of southeast Asia. The singa that people saw on the island they later named Singapura was actually a monkey that looked like a lion. Artistic license, interpretation or fact?

Another bold approach in his paintings is to superimpose the portraits of current Malaysian personalities on to the ornately-clad figures of olden-day heroes and villains. Again the artist in the man uses his imaginative license in order to attract interest in his artworks. But I suspect that the man in the artist wants to assert his views on the current political scenario through his art.

Ismail Embong is committed to producing an artistic vision or philosophy of the country’s history and heritage through his paintings. His huge murals are outstanding but he has also done a series of smaller paintings on traditional houses in selected parts of Malaysia. In front of each house he plants a local woman dressed in traditional regalia. And again the portraits are of real women he knows.

I then challenged him to paint a big eclectic mural depicting the contributions of Malaysian women in their many roles including the traditional and modern. I reasoned that they must be portrayed not just as dressed-up symbols of womanhood but as living beings, growing in every capacity and participating fully in the nation’s development. Similarly, images of outstanding women in Malaysian history can be used including those of current movers and shakers of society.

Having received national accolades as Tokoh Pelukis Negara and Tokoh  Hari Malaysia, Pak Ismail’s artworks enjoy the patronage of the Rulers, Prime Minister, Ministers, other VIPs as well as the art community. The man as an artist is indeed proud of his achievements as the gleam in his eyes show.

But the artist as a man has ambitions beyond the shores of his motherland. Having lived in the UK and studied the European traditions in art, Ismail Embong hopes that one day his works will be exhibited abroad, particularly in England and the European countries. In this way, Malaysian history and heritage depicted in art will be shown around the world and probably selected by some museums of repute.

Finally, Pak Ismail shared with me his secret dream of being reunited with his Hell’s Angels colleagues in a veritable memoir or at least a chapter or two of his biography. Being a member of the Hell’s Angels is probably not everyone’s dream but Pak Ismail explained that the group was a brotherhood like many other brotherhoods in the 70s, united by their passion of riding powerful motor bikes. But what was important then was the absolute loyalty of brotherhood which endures till today.

* Datuk Halimah Mohd Said is the President of Association of Voices of Peace, Conscience and Reason (PCORE).

** The views and opinions expressed in this article are those of the author(s) and do not necessarily reflect the position of Astro AWANI.